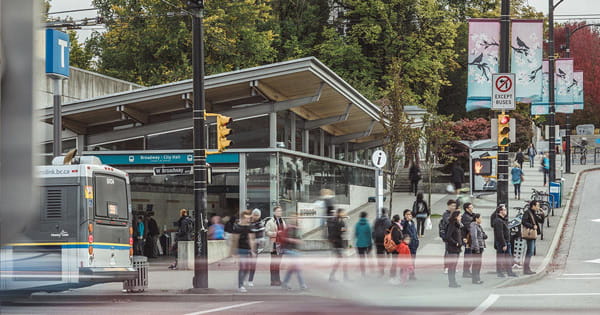 Vancouver’s Broadway Corridor is an important economic, healthcare, and residential centre, and the busiest bus route in Canada and the U.S.A – with more than 100,000 transit trips each day.

Over the next 30 years, Metro Vancouver will welcome 1 million new residents and 600,000 new jobs. As the region grows, so do its transportation needs.

The Broadway Subway Project is a direct extension of the existing Millennium Line.

Scheduled to open in 2025, the province of British Columbia is delivering this project in partnership with TransLink and the City of Vancouver.

Continuing from VCC–Clark Station on an elevated guideway for 700 metres, the extension will then travel underground along Broadway for 5 km.

The project includes 6 new underground stations, including an interim terminus station at Arbutus Street as a future phase of investment could extend rapid transit all the way to UBC’s Point Grey campus with a Millennium Line UBC extension. Until that time, B-Line bus service will continue between Arbutus Street and UBC.

Construction on the Broadway Subway Project is underway. During construction, routes 9 and 99 will remain on Broadway. For more information, please visit  broadwaysubway.ca.