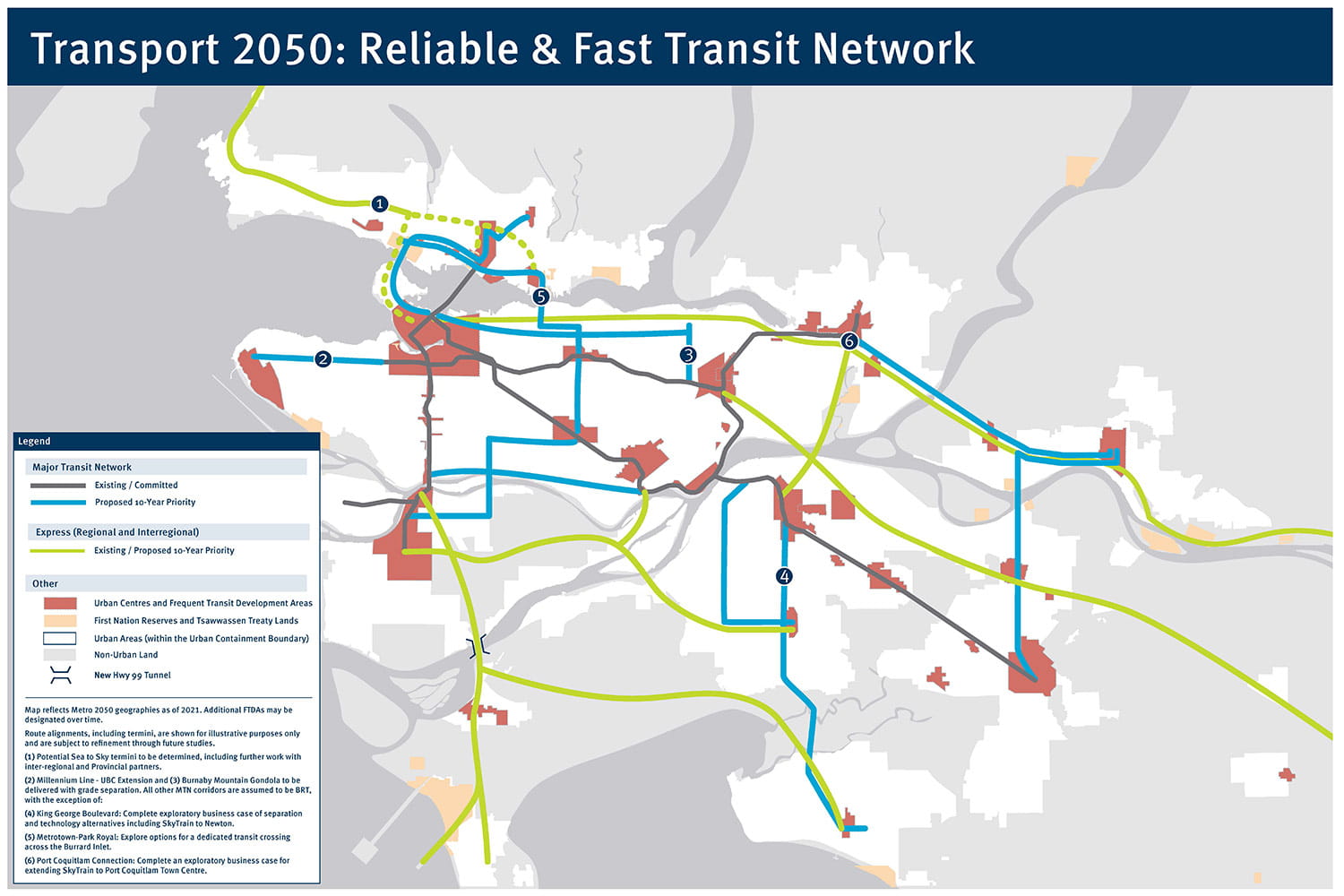 The proposed 10-Year Priorities is the next step to implement the ambitious goals and targets set out in Transport 2050, Metro Vancouver’s recently approved 30-year Regional Transportation Strategy.

Proposed investments detailed in the 10-Year Priorities include:

The Transport 2050 Strategy concluded that there is an urgent and widespread need to address climate change, housing affordability, and traffic congestion by increasing and improving transit service as quickly and cost-effectively as possible.

With Transport 2050: 10-Year Priorities, TransLink is proposing an expansion of the SkyTrain network, an unprecedented increase in local bus service, and introducing high-capacity Bus Rapid Transit. This new zero-emissions bus-based rapid transit could be deployed along high-demand corridors throughout Metro Vancouver at a fraction of the cost and time compared to rail-based technology. See the Bus Rapid Transit backgrounder for more details.

In addition to Transport 2050: 10-Year Priorities, TransLink is also releasing the 2022 Investment Plan, which aims to stabilize funding over the next three years.

TransLink is accepting comments from the public on both the 2022 Investment Plan and Transport 2050: 10-Year Priorities starting today. Visit translink.ca/priorities to take the survey until May 4, 2022.

Transport 2050: 10-Year Priorities is a blueprint that identifies our region’s top priorities, so we can get started right away on the first ten years of Transport 2050 investments, which will be funded through future Investment Plans. It is an update to the Mayors’ Council’s 2014 Vision for Metro Vancouver Transit and Transportation.

Jonathan Coté, Chair, Mayors’ Council on Regional Transportation –
“Transport 2050: 10-Year Priorities is an ambitious and necessary plan that outlines more than double the investments from our previous Mayors’ Vision. I am confident that with a broadly supported set of priorities and a strong partnership with the Province of BC and the Government of Canada, we can deliver on these shared benefits.”

Kevin Quinn, CEO, TransLink –
“It’s critical that we lay the groundwork for achieving the region’s shared goals set out in Transport 2050. Our region needs to rapidly invest in transportation improvements to combat climate change, address the housing affordability crisis, and improve congestion in a growing region. Transport 2050: 10-Year Priorities will chart a fast and effective course to quality transportation choices for the people of Metro Vancouver.”

George Heyman, Minister of Environment and Climate Change Strategy –
“Expanding and strengthening our public transit is one of the smartest ways to address climate change, reduce time-wasting congestion and make transportation more affordable and convenient. The priorities in this plan are wide-ranging, ambitious, and achievable. They will support the shift in transportation initiatives that are a central part of both our CleanBC Climate Roadmap and TransLink’s own plans.”

Like all transit providers across North America, TransLink faced unprecedented financial challenges during the COVID-19 pandemic, with significant impact on transit ridership and fare revenue. Planning for beyond the pandemic, TransLink must ensure that it has a strong foundation to build upon by stabilizing funding. The 2022 Investment Plan aims to stabilize funding over the next three years by maintaining transit services, advancing strategic projects, and replacing lost revenue streams.

TransLink updates its Investment Plan at least every three years, as required by legislation, and to account for new investment priorities.

Highlights of the 2022 Investment Plan:

What is Bus Rapid Transit (BRT)?

We’re matching service to projected future demand, to ensure we have the right technology in the right place to handle the transportation demands of a growing region.

BRT is economical to deploy — approximately 25 times less expensive per kilometre than SkyTrain (including stations) — because it can be implemented at street level and doesn’t require tunneling or the construction of elevated guideways.

Before any procurement and construction begins, all rapid transit systems must undergo significant study and engagement. Including business case development, this process can take anywhere from 1 to 3 years. However, one of the main advantages of BRT is that it can be rapidly deployed.

Based on the nine proposed corridors within the Transport 2050: 10-Year Priorities, people in the region would see an immediate benefit with fast, frequent, and reliable transit options, particularly suited for long-distance trips in the region.