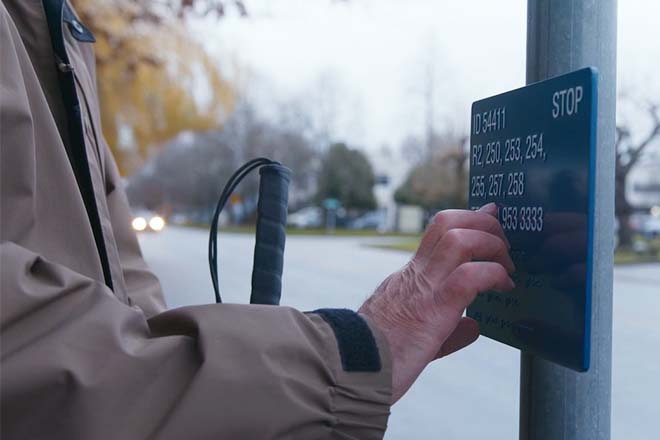 8,400 bus stops throughout Metro Vancouver to be equipped with braille signage

NEW WESTMINSTER, B.C. – TransLink is taking a major step forward in assisting customers who are blind or partially sighted by installing braille signage at every bus stop throughout the region. To make it easier to find bus stops, TransLink will also install tactile walking surface indicators at every bus stop on property that TransLink owns or leases.

These improvements will help customers who are blind or partially sighted better navigate the transit system by letting them know which stop they are at and which buses they are waiting for. Once installed, TransLink will be the first transit system in Canada to install braille signage across its entire bus system. Installation begins today and is projected to complete by the end of 2022.

“These braille signs and walking surface indicators will help so many people in the community more independently navigate our transit system,” says TransLink CEO Kevin Quinn. “Accessibility is imperative to a quality transit system, and I am very proud of this major step forward for our customers who are blind or partially sighted.”

“The installation of these signs providing transit information in both braille and tactile letter formats is demonstrative of TransLink and Coast Mountain Bus Company’s commitment to providing accessible transit in Metro Vancouver,” says Rob Sleath, a member of Access Transit’s Users' Advisory Committee. “Tactile signage affixed to a bus stop ID pole will allow those of us with sight loss to accurately distinguish an ID pole from a municipal parking regulation pole and will provide us with the transit information that is readily available to sighted transit users. This will be a major contributor to our ability to travel with confidence anywhere throughout the entire Metro Vancouver area.”

These changes are the result of robust engagement with Access Transit's Users' Advisory Committee, the Canadian National Institute for the Blind, and many other regional stakeholders.

“The installation of braille signage and tactile walking surface indicators will help improve the accessibility of TransLink bus routes for riders who are blind or partially sighted,” says Robert Gaunt, Executive Director, CNIB. “We commend TransLink for making this important investment and for their ongoing commitment to improving the overall accessibility of Metro Vancouver's public transportation system.”

This initiative is part of achieving TransLink’s goal of being one of the most accessible transit systems in the world. For customers seeking assistance with live transit information or customer support, please call our Customer Information team at 604-953-3333.