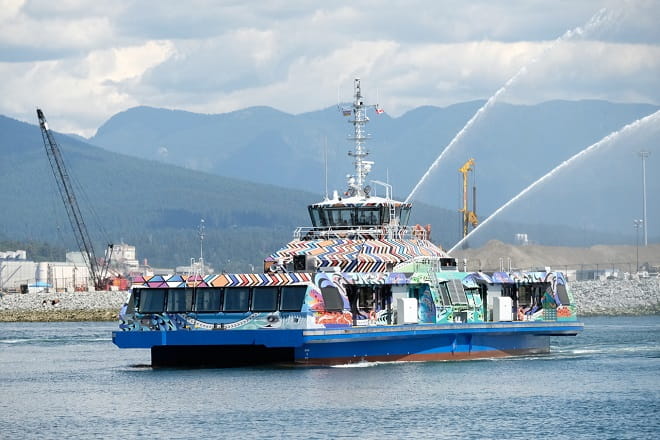 Sailing on the shared unceded territories of xʷməθkʷəyə̓m (the Musqueam Indian Band),  Sḵwxw̱ ú7mesh Úxwumixw (the Squamish Nation), and səlilwətaɬ, (the Tsleil-Waututh Nation), the vessel’s name and art were selected and designed as a tribute to the Chinook salmon, one of the most iconic species in Pacific waters. The Chinook salmon has played a central role in life on the West Coast for generations and is a critical part of the ecosystem in the Burrard Inlet and the Pacific Ocean.

Designed by artists Kelly Cannell, Siobhan Joseph, and Angela George from the three local Nations, the art wrap surrounding the exterior of the vessel illustrates the lifecycle of the Chinook salmon, as well as the historical importance of the Chinook salmon to its ecosystem. A full artist attribution plaque on board the vessel conveys the artists’ design inspiration for SeaBus passengers to appreciate.

TransLink acknowledges, respects, and celebrates the Indigenous Nations on whose territories we are fortunate to live, work, operate, and serve. TransLink recognizes the importance of having Indigenous art on display in public spaces, and this artwork joins other Indigenous art on our system such as multiple installations throughout stations on the Evergreen extension, Surrey Central Station, and Commercial–Broadway Station.

Identified as a regional priority by the Mayors’ Council 10-Year Vision for Metro Vancouver Transit and Transportation, the Burrard Chinook will allow Coast Mountain Bus Company to be able to deliver ten-minute SeaBus sailings with more reliability and with more maintenance flexibility throughout the day. This additional vessel will allow an older SeaBus to be used as a spare vessel during peak sailing hours.

This $32 million investment through the Public Transit Infrastructure Fund (PTIF) is funded by the Government of Canada (50 per cent), the Province of British Columbia (33 per cent), and TransLink (17 per cent). The funding supported the purchase and commissioning of the Burrard Chinook vessel, as well as upgrades to the SeaBus terminals.

Terry Beech, Member of Parliament for Burnaby North—Seymour on behalf of the Honourable Catherine McKenna, Minister of Infrastructure and Communities –

“Investing in public transit is an essential part of a growing economy and helps residents spend less time in traffic and more time with their families. The new Burrard Chinook SeaBus will contribute to the reliability and efficiency of Metro Vancouver’s SeaBus system while exposing riders to meaningful artwork that uniquely illustrates the West Coast environment and culture. Canada’s Infrastructure plan invests in thousands of projects, creates good jobs across Canada, and builds cleaner, more inclusive communities.”

The Honourable Bowinn Ma, Minister of State for Infrastructure and Member of the Legislative Assembly for North Vancouver–Lonsdale –

“Wrapped in Indigenous artwork, the Burrard Chinook is a meaningful and exciting addition to one of the most important transit services in the region. Providing people with more socially, environmentally responsible travel options that allow them to leave their cars at home reduces congestion, reduces our carbon footprint, and helps create more livable communities. Our government has been a proud funding partner for the upgrades at Lonsdale Quay, Waterfront Station, and this beautiful new SeaBus.”

“People always tell me how much they love the SeaBus. To enhance our transit network and community connection, we must beautify our transportation infrastructure so that it reflects our local identity. That is why I am so pleased the new Burrard Chinook SeaBus honours Indigenous people and culture through art. The new SeaBus and the newly renovated Lonsdale Quay Exchange together will provide a vibrant and welcoming experience for all people when they visit the North Shore.”

“The SeaBus is an iconic part of Metro Vancouver’s transit system, providing a vital service that bridges the gap across the Burrard Inlet and connects the communities of our region. TransLink proudly worked alongside members of the Musqueam, Squamish, and Tsleil-Waututh Nations to adorn the new Burrard Chinook SeaBus with artwork that honours local Indigenous history and culture. We look forward to future collaborations with First Nations as we continue our journey toward true and meaningful reconciliation.”